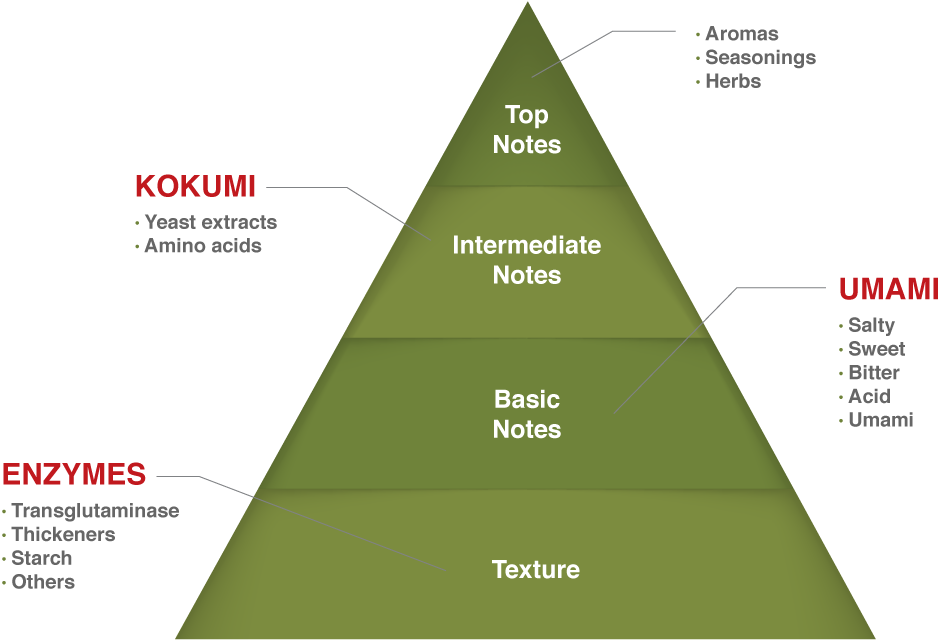 In addition to the four known tastes: sweet, sour, bitter and salty, we also feel the “Umami”, scientifically recognized as the 5th basic taste that the human palate is capable of perceiving.

In 1908, Dr. Kikunae Ikeda, a researcher and professor at the Imperial University of Tokyo, discovered from experiments with seaweed, a fifth taste and called it Umami, which in Japanese means "tasty". Umami is one of the main responsible for the richness and harmony of flavor, in addition to contributing to the sensory acceptance of food.

That glutamate is a natural element present in the human body and in breast milk?

Of the 20 free amino acids present in breast milk, glutamate is the one that presents itself in greater quantity, representing more than 50% of the total free amino acids. Its presence can interfere with the acceptability of taste for newborns.

That Umami is present in different foods?

The three main substances responsible for umami - glutamate, inosinate and guanylate - are naturally present in different foods, in varying amounts. We can find the fifth taste inParmesan cheeses, fish, tomatoes, asparagus, mushrooms, breast milk and monosodium glutamate.Tomato is the main Umami food in the vegetable group. The next time you taste it, you will notice that right after the perception of the sweet and sour taste, a third taste remains - Umami. In bolognese sauce, for example, which combines tomato and meat, the fifth taste intensifies and can be even more pronounced when added with Parmesan cheese - another very umami Food.

One of the biggest benefits ofumami taste is to promote the production of saliva, essential for someconditions that cause dry mouth and to guarantee pleasure when eating.
‍
Learn more in:

That Umami can help with food acceptance by the elderly?

Between 60 and 70 years of age, the decrease in taste perception is more pronounced. With reduced pleasure at mealtimes, it is common for the elderly to also decrease the amount of food eaten. Over time, this reduction can cause some health problems. Adding Umami-rich foods to the elderly's diet helps make meals more tasty and thus increases food intake in old age.

That Umami can help cancer patients to eat better?

Unfortunately, patients undergoing certain types of cancer treatments experience changes in saliva production - called xerostomia or "dry mouth". The waves of radiotherapy, for example, damage the tissue of the salivary glands, which consequently reduce production. Meanwhile, the drugs used during chemotherapy can lead to the production of thicker saliva, causing the sensation of dryness as a side effect.

Such problems can directly influence patients' nutrition, as they make it difficult to eat and digest food. In addition, it is very common for the debilitated patient not to feel like eating. But, when they do not eat properly, they do not strengthen the organism that is already fragile, and may even harm the treatment. That's whereUmami comes in and all the "power" of the fifth taste.

Do you know the difference between taste and taste?

Taste refers only to the sense of taste. Specific receptors present on the tongue recognize a particular stimulus provided by substances present in food. The taste of food is recognized by the combination of two or more senses: the TASTE (which refers to taste) + the SMELL (which refers to the aroma of food).

Four basic tastes are clearly recognized by key foods, that is, salty is represented by salt, sweet by sugar, bitter by coffee, sour by vinegar; but what about the fifth taste, where is it present? We can find the fifth taste in Parmesan cheeses, fish, tomatoes, asparagus, mushrooms, breast milk and monosodium glutamate.

Do you know the difference between Umami and monosodium glutamate?

When we start to explore our taste buds, it is inevitable to come across umami and, from there, reach monosodium glutamate (also called MSG). Some people then begin to treat the two as the same thing, but there are basic conceptual differences between one and the other.

Umami, like sweet, salty, sour and bitter, is a taste perceived by our palate - and it was discovered and scientifically proven after the other four, it is called "fifthtaste".

Monosodium glutamate can also be called glutamate salt, and is used in cooking to enhance the Umami taste of food. Its manufacturing process consists of the fermentation of sugarcane to obtain glutamic acid, the main component of the amino acid responsible for the fifth taste. This acid is neutralized, obtaining monosodium glutamate, used to enrich the preparations in the kitchen. To explain in practice: if we put sugar in food to emphasize its sweetness and salt to accentuate the salty, monosodium glutamate serves Umami for the same purpose. 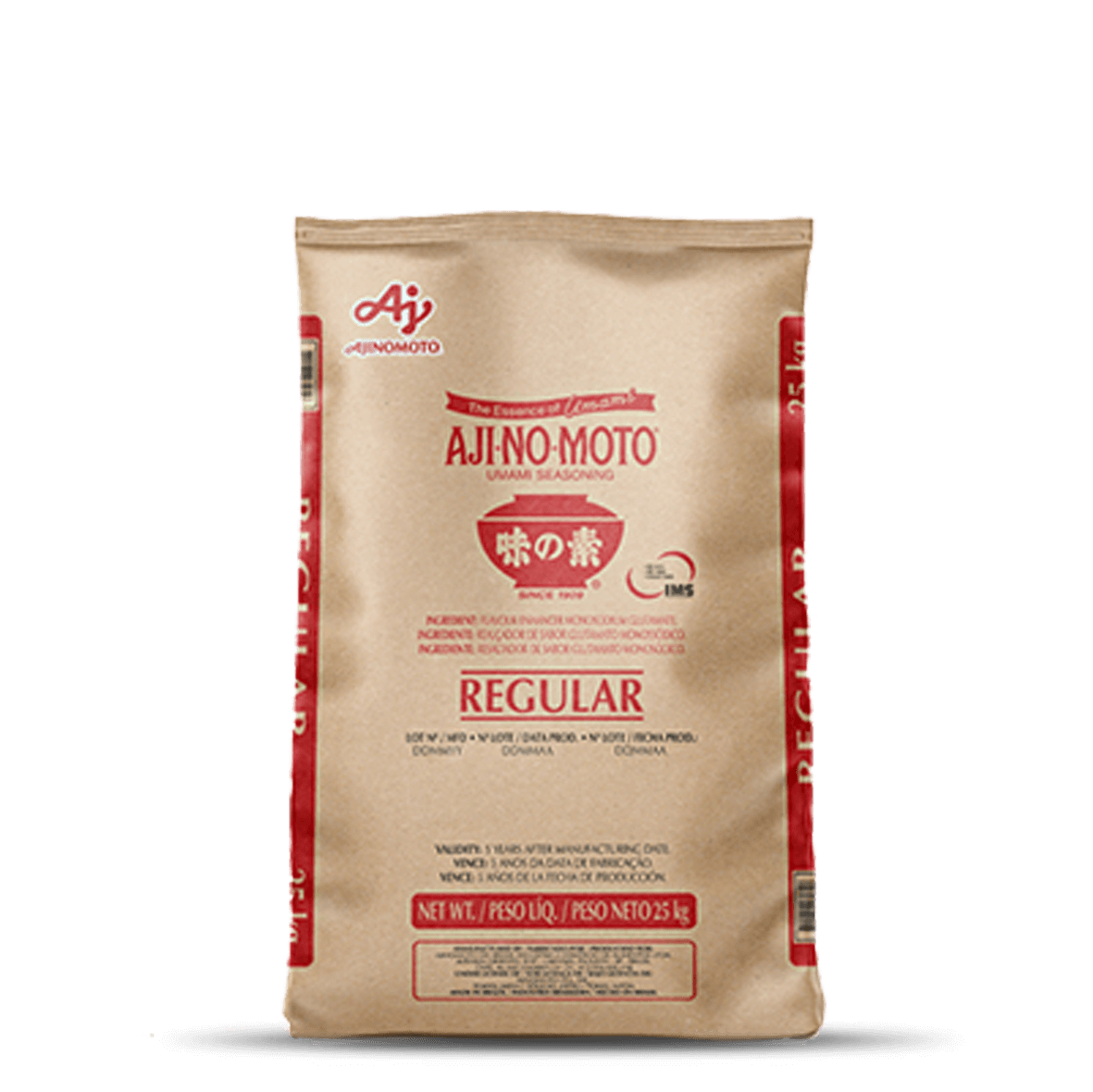 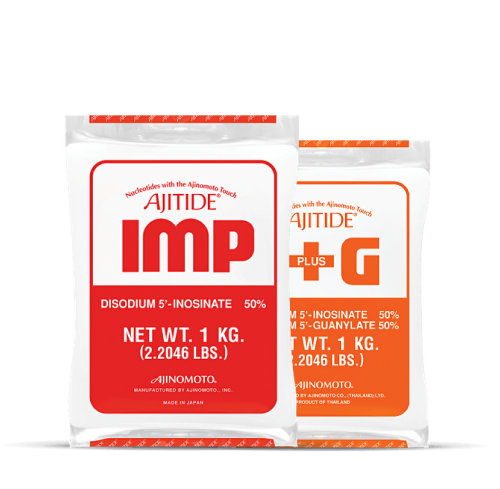 It is a word of Japanese origin that means "rich flavor". Kokumi goes beyond the perception of the five basic tastes and provides us with a complete sensory experience, which balances important characteristics such as initial impact of flavor, filling and continuity.

It provides the improvement taste and enriches the sensory profile, giving more impact, continuity and harmony.

It provides the cost reduction, enhancing the effect of some ingredients and optimize the formulations. 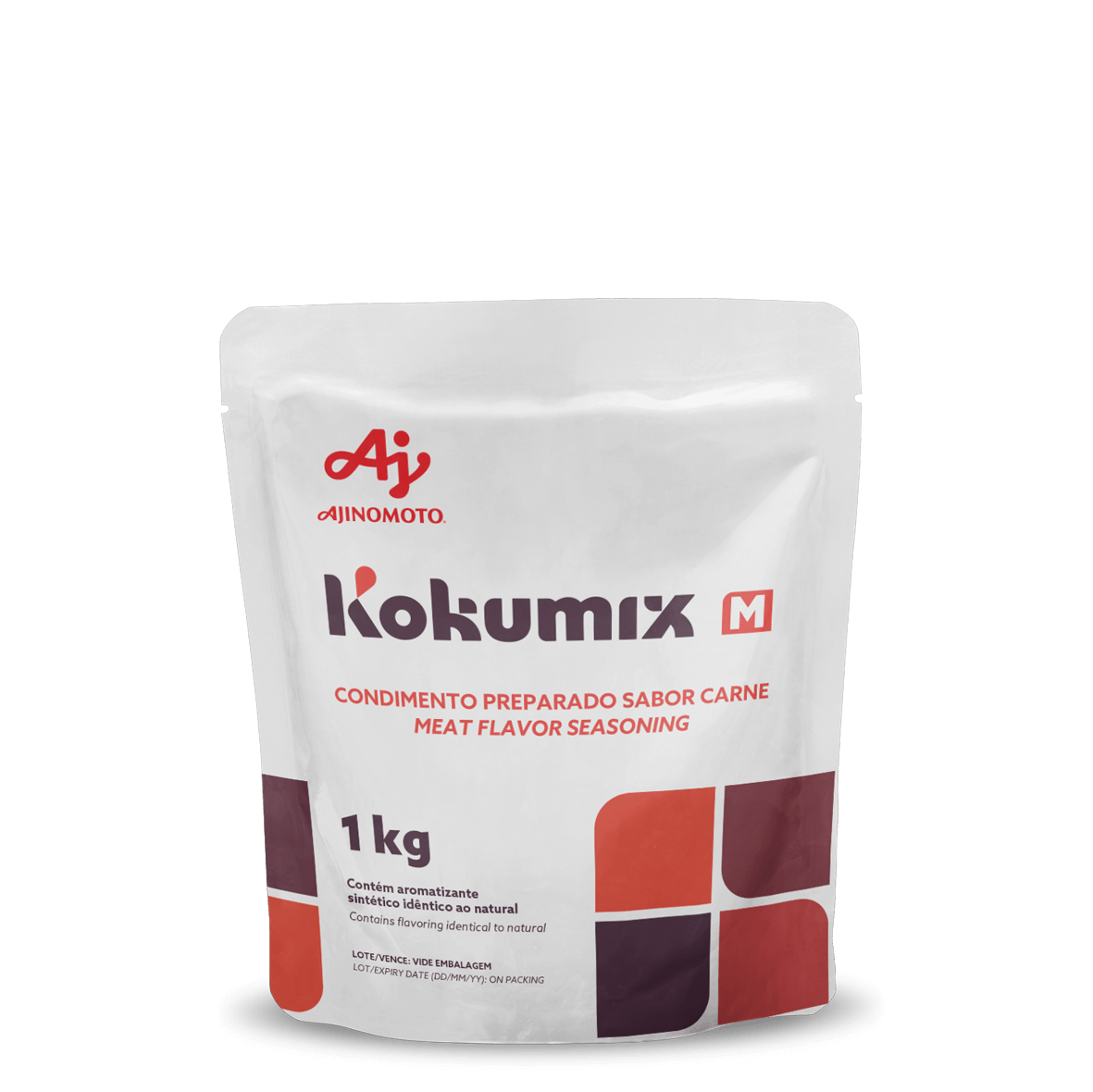 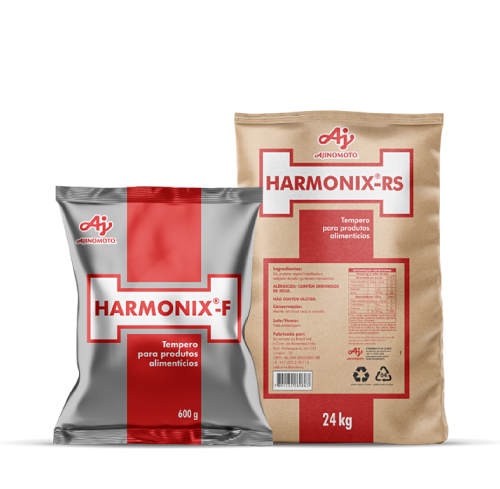 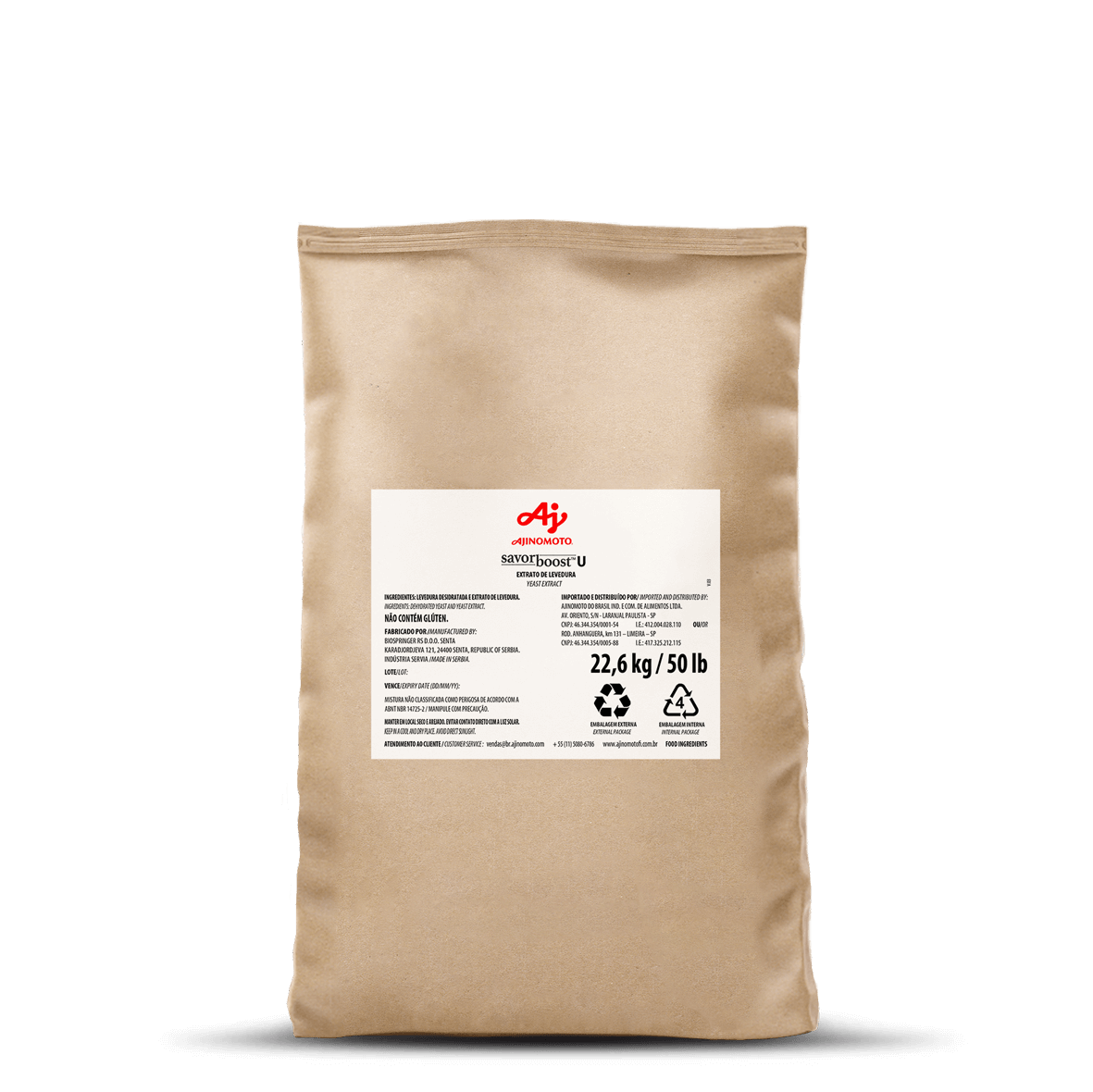 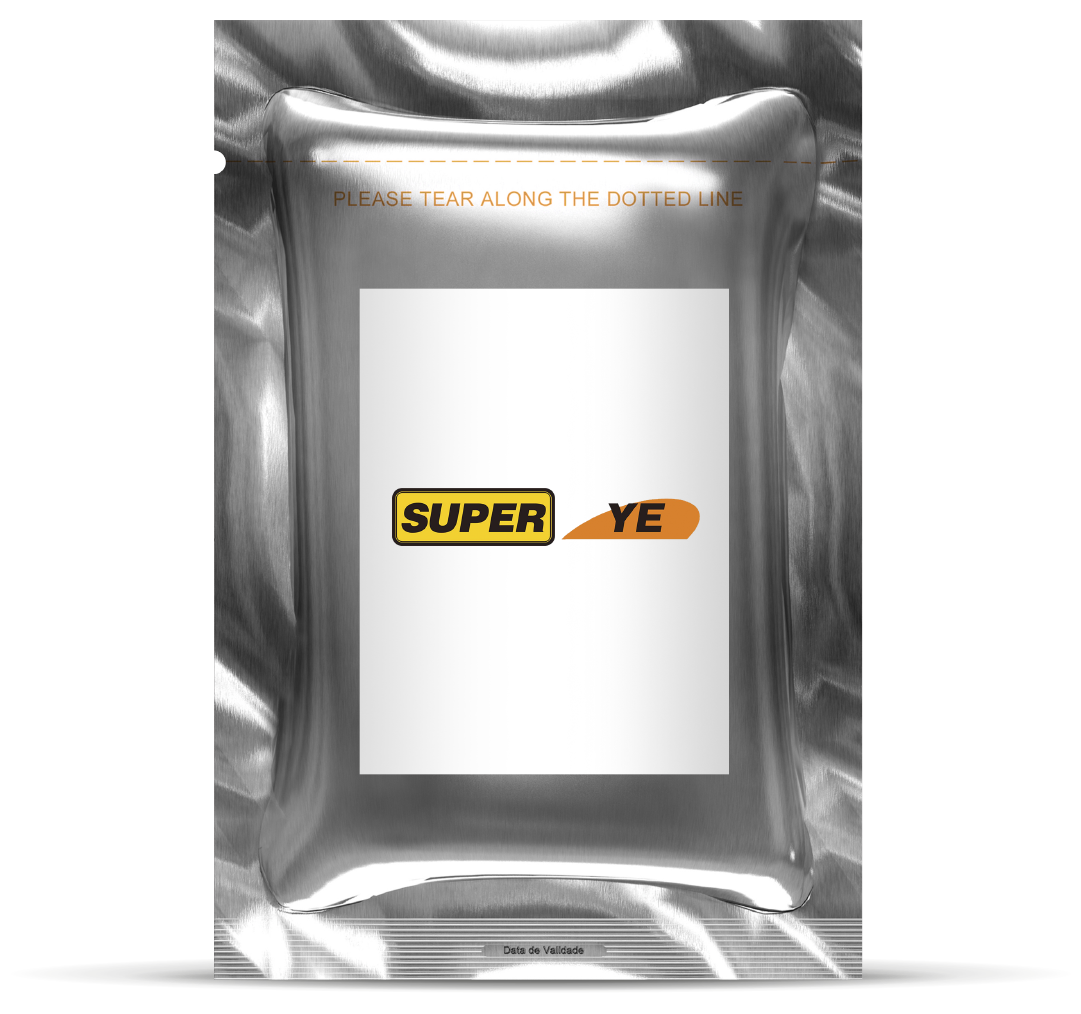 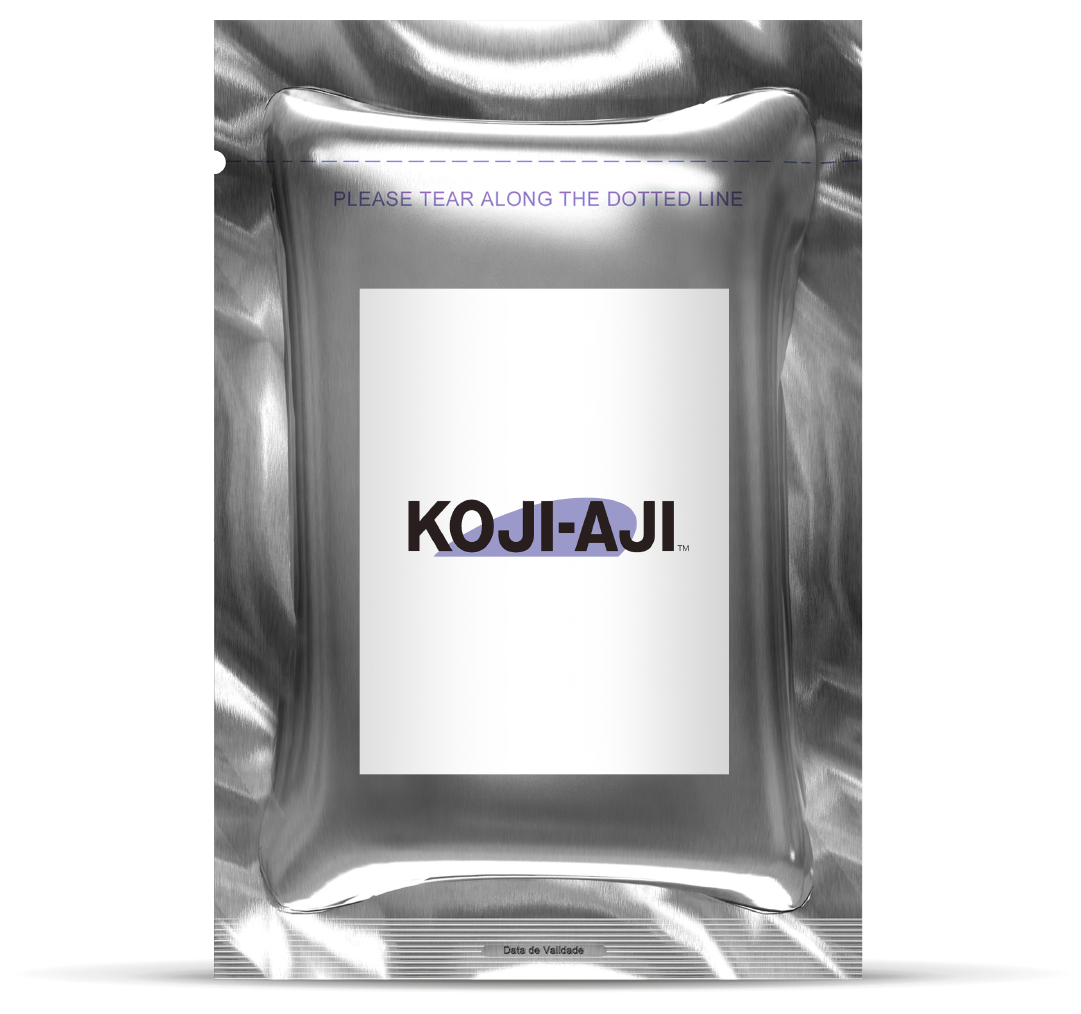 They are proteins that act as biological catalysts and can be used in the manufacture of a variety of food products. They can be found naturally in countless biological systems, such as: food, vegetables, microorganisms, animals, humans, among others.

It promotes the improvement of texture,feasibility and viscosity of the product

Enables the reduction of process losses

Enzymes also act on the texture of food, a determining factor in consumer preference, which influences product acceptance. In addition to being visually appealing, tasty and healthy, foods need to offer a texture that suits consumers' expectations.

The quality of the texture is fundamental to avoid waste in some segments of the industry. For example, sliced ​​meat products (such as hams and bologna) with low firmness and little elasticity can generate brittle slices, increasing the loss during slicing. 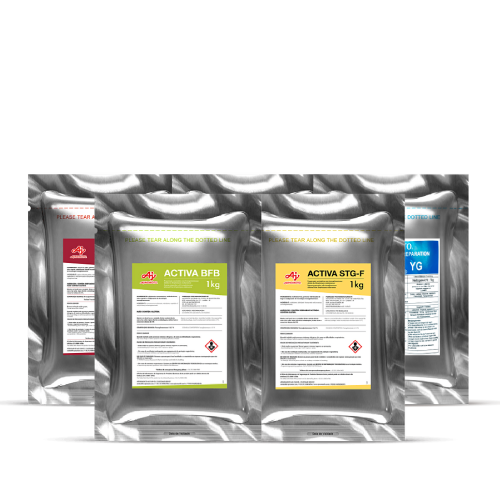 Sweeteners are substances of low energy value that impart sweetness and are excellent alternatives for the development of low calorie products.

Sweeteners can be applied to foods, beverages, ingredients, supplements and medications, promoting benefits such as reduced sugar, masking flavors and residual tastes and enhancing specific flavors.

AminoSweet is a low-calorie sweetener based on aspartame, produced by Ajinomoto from two amino acids (aspartic acid and phenylalanine).

With sweetness power 200 times greater than that of ordinary sugar, AminoSweet presents a sensory profile closer to sucrose, without any unwanted residual tastes and has excellent physical and chemical stability during storage and processing, being soluble in water and ethanol. In addition to acting as a sweetener, it is also a flavor enhancer for certain categories according to the legislation. 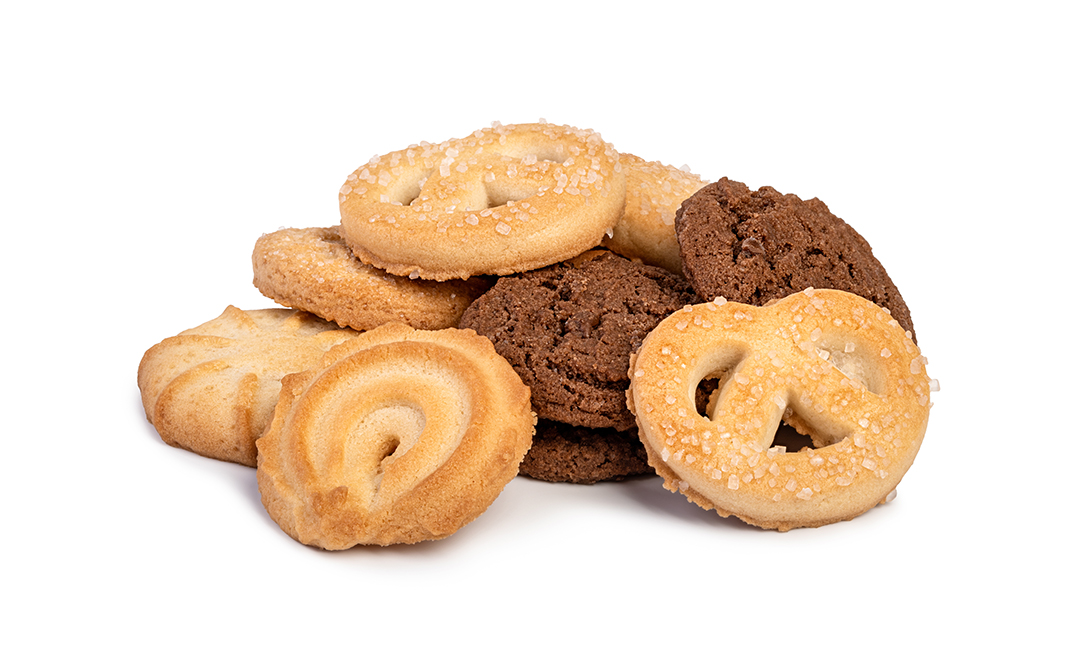 It promotes the cost reduction, used in low volume on sugar substitution

It improves the sensorial profile of the final product 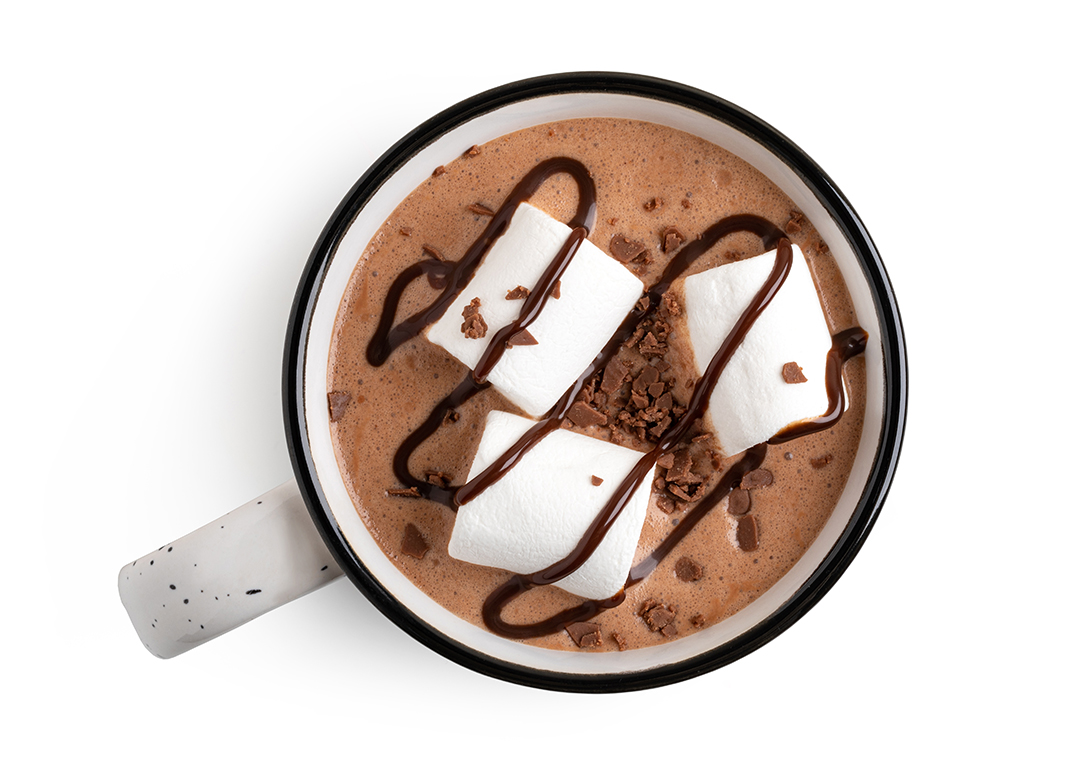 AjiSweet™ VM95IP is the commercial name of a technological solution developed by Ajinomoto based on Advantame (aspartame and vanillin), which can be used as a substance for aroma or as a high intensity sweetener (new generation). On average, ADVANTAME is 20,000 times sweeter than sucrose and 100 times sweeter than aspartame.

Ajisweet™ VM95IP acts as an excellent alternative to mask undesirable residual tastes such as the bitter and the metallic, and has strong synergy with aromas and other sweeteners and when used together, enhances the taste and improves even more the taste of food.

Promotes cost reduction due to reduction of sugar and other ingredients

Interested in solutions for reducing sugar and to promote long lasting sweetness?

Click and get to know our sweetener line AminoSweet e AjiSweet™ 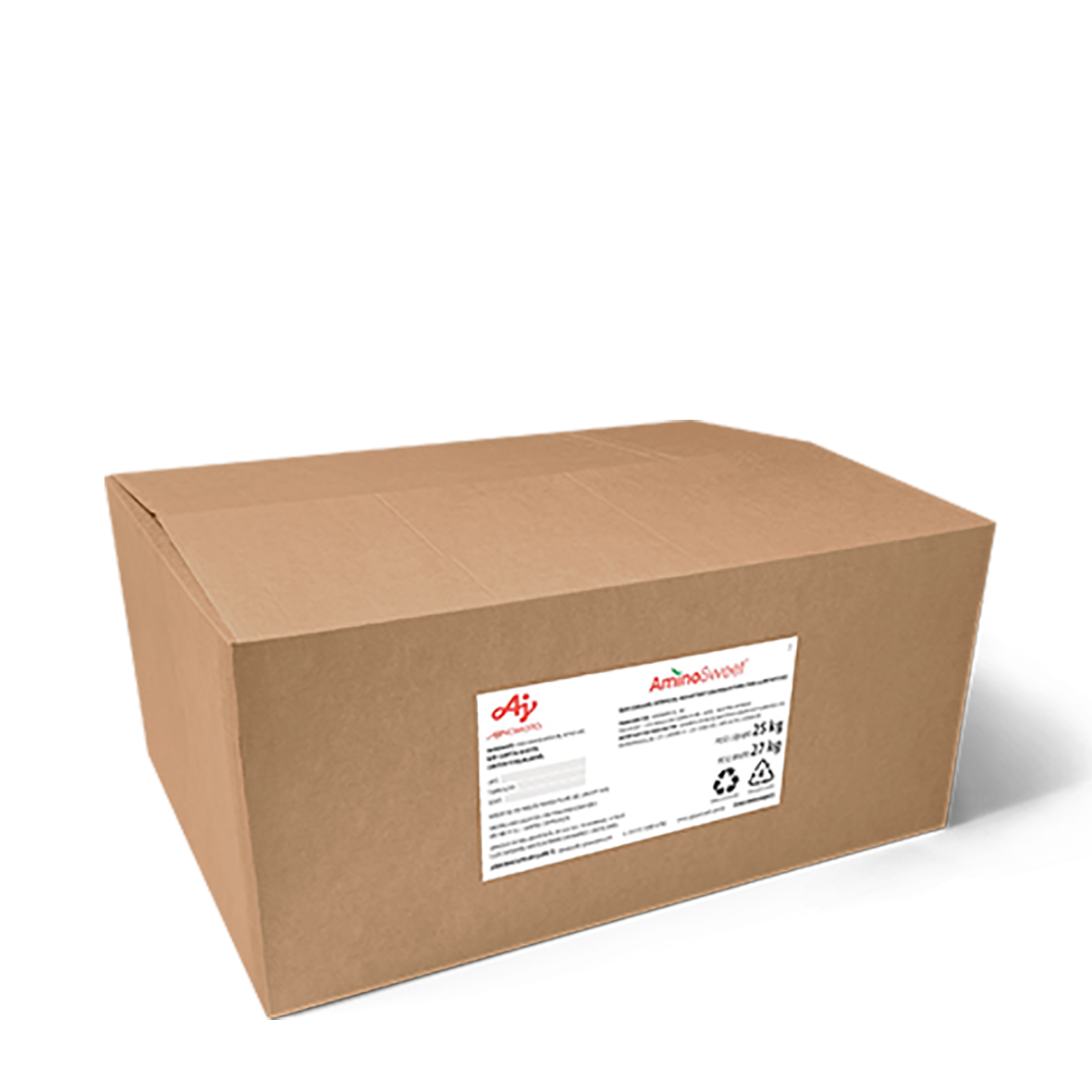 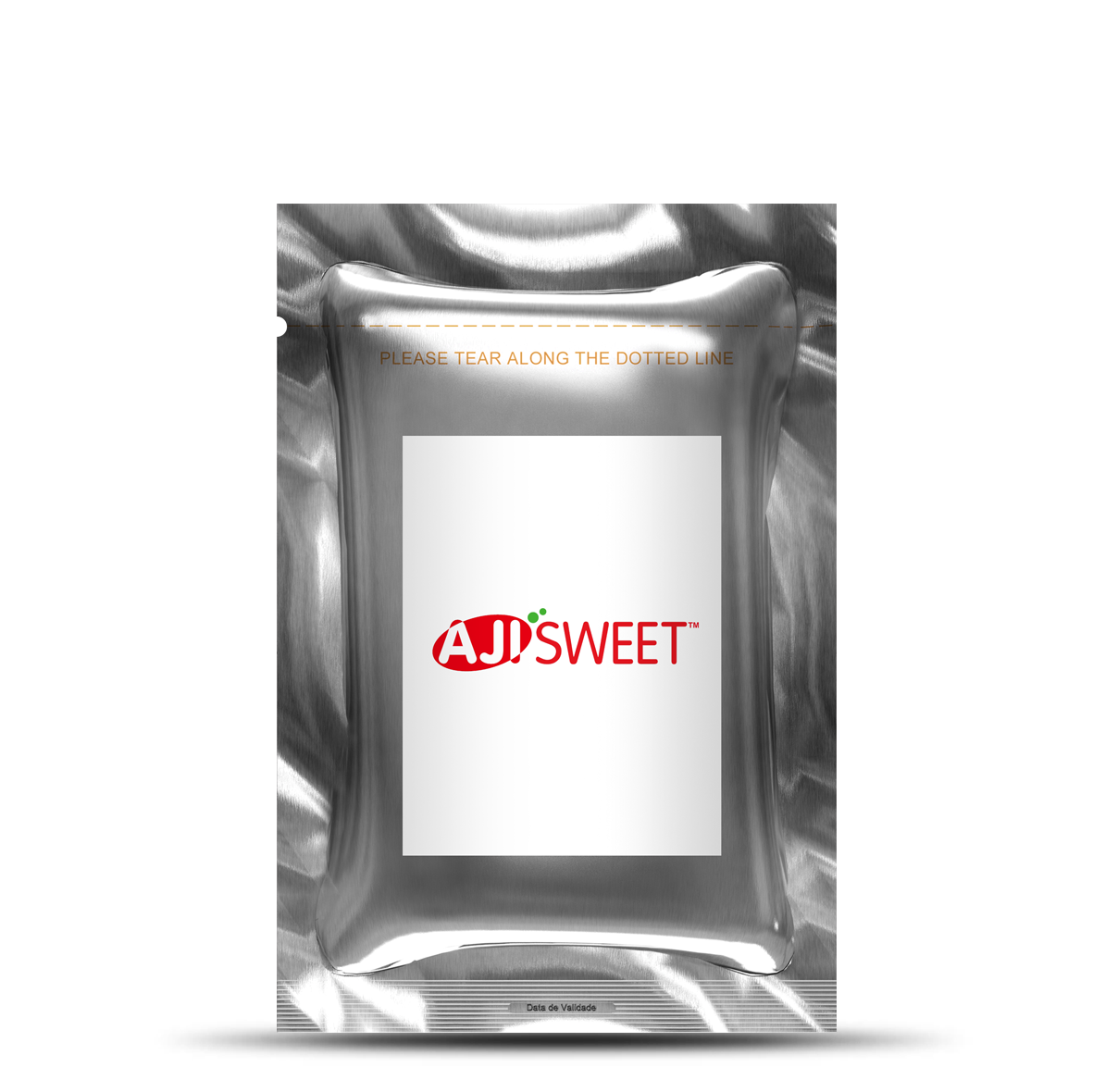